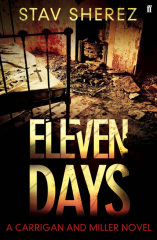 A Dark Redemption, the first book in the Carrigan and Miller series was the book of 2012 for me, a politically astute and truly unsettling work, written in some of the most beautiful prose you could hope to find in the crime genre, but the real hook was how Sherez leads the reader into London’s secret corners, unearthing the communities less seen and their dark, complicated histories.  Now Sherez is back with Eleven Days and once again we’re taken off the beaten track with a story which will make you look at the city afresh.

With Christmas approaching and snow blanketing the city Carrigan and Miller are called to a fire on a affluent west London square.  Hidden among the houses, the centre of the blaze is tiny convent home to the Sisters of Suffering.  Records show that ten nuns were in residence at the time of the fire and once the smoke settles the search team discovers their corpses around the dining table in a room locked from inside.  But then an eleventh body is found, trapped in a confessional in the basement, and this person hasn’t gone to their death quite as passively.

Aware of the potential media interest across the dead time of the holidays Carrigan’s boss pushes for a PR friendly result, any suspect will do as long as it doesn’t reflect badly on the church, but as they delve into the history of the order and the sisters’ community outreach work, which is far from universally popular, they begin to suspect that the case is more complicated than a random arson.  A suspicion which solidifies when they crash into a wall of perfectly polite resistance from the diocese, who are reluctant to have church business made public.  But surely they wouldn’t kill over it.  Unlike the Albanian gangsters who have taken an interest in the order and now have Carrigan and Miller in their sights.

The Catholic church, with its labyrinthine protocols and myriad dirty secrets has been a boon for crime writers, with most following a predictable if outlandish formula, but Stav Sherez has neatly stepped away from those hoary tropes, exploring instead issues of Liberation Theology, workers activism and people trafficking, with a brutal, long buried history reaching across forty years to touch the present day.  It’s ambitious, thought provoking material but Sherez weaves it into a solid crime narrative with impressive skill.

Eleven Days is the second book to feature Carrigan and Miller and their personal stories are gradually developing.  Carrigan, still haunted by his wife’s death and dealing with his mother’s dementia, meets a new woman but doesn’t seem ready to get involved.  While Miller’s divorce, touched on A Dark Redemption, is becoming increasingly acrimonious, and her affair with a married man is leaving her dissatisfied.  They’re a great pairing and I’m looking forward to seeing how these elements develop further in the next book.

I’ll admit to having high expectations after reading A Dark Redemption and Eleven Days has only cemented my opinion that Stav Sherez belongs in the top league of British crime writers.  This is a clever, compelling book, dark without being gratuitous and Sherez’s evocative portrayal of London is second to none.

Eleven Days is out now