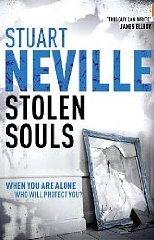 I have to admit to being a little in awe of Stuart Neville.  His 2009 debut The Twelve, a nuanced and powerfully written novel about The Troubles, was lauded by critics and readers alike.  The follow up Collusion was if anything more harrowing, a modern revenge tragedy, ambitious in scope and stylishly executed, but Stolen Souls sees Neville putting the politics aside to move into classic crime fiction territory.

Like tens of thousands of young women before her Gayla Petrova believes she can make a better life in the UK, work hard as a nanny, send money home to educate her brother.  The reality she finds in Belfast is very different, a brief stint on a mushroom farm followed, inevitably, by relocation to a suburban brothel.  The usual process – in life as in fiction – of abuse then acquiescence is not for Gayla though.  She’s tougher than the others and when it comes time for the break-in round she fights back, cutting the throat of her would-be rapist.

Unfortunately for Gayla Tomas isn’t some random client but part of the international people trafficking operation which has brought her to Belfast.  In the ensuing chaos, as his associates try to dump his body and distance themselves from the murder, Gayla runs.  She only knows one person in this strange city, a man who has given her a cross and his phone number and promised to help her if she ever manages to escape.  He is no good Samaritan though, even if he claims to be a pastor, and soon Gayla is imprisoned in an isolated house with patchy concrete in the basement and a Grand Guignol surprise waiting upstairs.

On the outside DI Jack Lennon is pitched into what appears to be an escalating turf war, with bodies piling up as Tomas’ family try track down Gayla – his mama wants revenge for her boy at any costs and they have the connections to get it.  Lennon just wants to spend christmas with his little girl but with Lithuanian gangsters, bent coppers and a ghost from his past closing in on him getting home begins to look increasingly unlikely.

In lesser hands Stolen Souls could have been just another cheap serial killer novel in a market already overstocked with them, but Stuart Neville is an outstanding  writer.  There is no slack anywhere in this book, not a wasted word or a single line of dialogue which jars; it is technically flawless.  Gayla Petrova is a fabulous heroine – definitely not a victim – all steel and cold logic, acting the way we hope we would in that situation.  In a genre dominated by fey child-women who die obligingly picturesque deaths she is a real original and a credit to Neville’s skills.

Stolen Souls is a brutalising read, the pace is unrelenting and the guts of the story so close to reality that there’s no shaking off the horror when you’re done with it.  If you’ve read Stuart Neville before then you know he brings it dark, if this is your first time with him you better brace yourself. 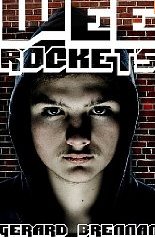 After last summers riots, and the resulting chorus of accusation and analysis from a remote middle class media, Wee Rockets feels like a very prescient book, focused on feral kids with lives dominated by casual brutality and rabid consumerism.  Reading some of the early reviews I was concerned that Gerard Brennan had turned out a piece of thinly veiled moral commentary – much talk of disenfranchisement and wasted lives – but he’s a far better writer than that and sidesteps the tedious politicising in order to produce another brisk and spiky crime novel.

Set on the mean streets of West Belfast – heartland of The Troubles but now in the throes of regeneration – Wee Rockets follows a group of young working class boys who aspire towards thugdom; you couldn’t call them a gang at the outset but they’re causing enough trouble to have the residents association worried and after they beat up an old dear local Gaelic footballer Stephen McVeigh turns vigilante on them, out to give the area some Provo-style justice.

The Wee Rockets leader, Joe Phillips, scents trouble and bails, at which point the gang dynamic shifts dramatically.  Taken over by a banger-wannabe with a chip on his shoulder they quickly graduate to harder drugs and more extreme acts of violence and Brennan creates a terrible velocity around their crime spree, making it seem inevitable that they will, at some point, kill.  Their growing reputation brings more attention from McVeigh, who’s still gunning for Joe, dating his mother Louise in order to get close to him.

Even away from the gang Joe’s problems deepen.  His dad Dermot’s back in town and looking for a reconciliation.  Louise isn’t buying the reformed routine – she knows what a charming gobshite Dermot is – but she tentatively approves; a boy needs his old man, even if he is a no-good, sucker-punching drug dealer who wants Joe for an apprentice/sacrificial lamb.  With the Wee Rockets out for his head too Joe has to find a way to extricate himself from the chaos, keeping his life and his liberty as both begin to look increasingly at risk.

Wee Rockets is being marketed as a hardboiled crime novel and it works perfectly as one – Brennan knows his skank as well as any writer around right now – but it’s packaged like a YA book and from the first page I thought it felt like the kind of dark, urban grit literate 11-14 year olds would love.  This is their world after all and Brennan has gone into it very sympathetically, saying ‘this is just what you have to do to survive.’  I think a lot of teenagers would respect that position while his adult readership might have forgotten the truth of it.

Brennan impressed me hugely with his debut novella The Point and Wee Rockets has cemented my opinion that he belongs among the top rank of Northern Irish crime writers.  He has a strong, recognisable voice, which sounds like a throwaway compliment but is actually very rare – how many writers could you identify from reading a single page?  Not many.  Brennan is unmistakable though.  His characters are unpleasantly authentic, his dialogue script-ready and his plotting tighter than a marching drum.